Jump to the recipe’s instructions

Zucchini noodles (zoodles?) are all the rage these days, and I love them just as much as the next gal, but they too often take a lot of time to make, and end up too watery to my taste. Fortunately I came up with a solution to both problems.
I don’t own a spiralizer (you know this super fancy gadget which is supposed to make your life so much easier and your waist so much smaller) so I cut my zucchini spaghetti with this:

It takes me between 5 and 10 mn to spaghettify a kilo of zucchini, whatever their size.

The second problem is the water content of the zucchini. They lose so much water while cooking that you more often than not end up with a soupy dish instead of the deliciousness you were expecting. But if you sprinkle them with salt and let them sit a little while in a colander, all this water will go down the sink and not into your plate. And BAM! Real zucchini noodles! Now, it seems a bit of a hassle to zoodle the veggies, then wait for them to be ready to cook, then prepare the other stuff, then… Are we lazy or are we not? Of course we are!

The key to success lies in the optimization of your time. Let’s say you come back from work hungry, crave for zucchini noodles (I know right?) but need to do everything from scratch. First thing to do, after you’ve put off your coat, is rush to the kitchen and spaghettify your zucchini (or, if you’re like me and are effectively planning your meals you can cut them in the morning and let them sit all day long. I assure you they won’t spoil). 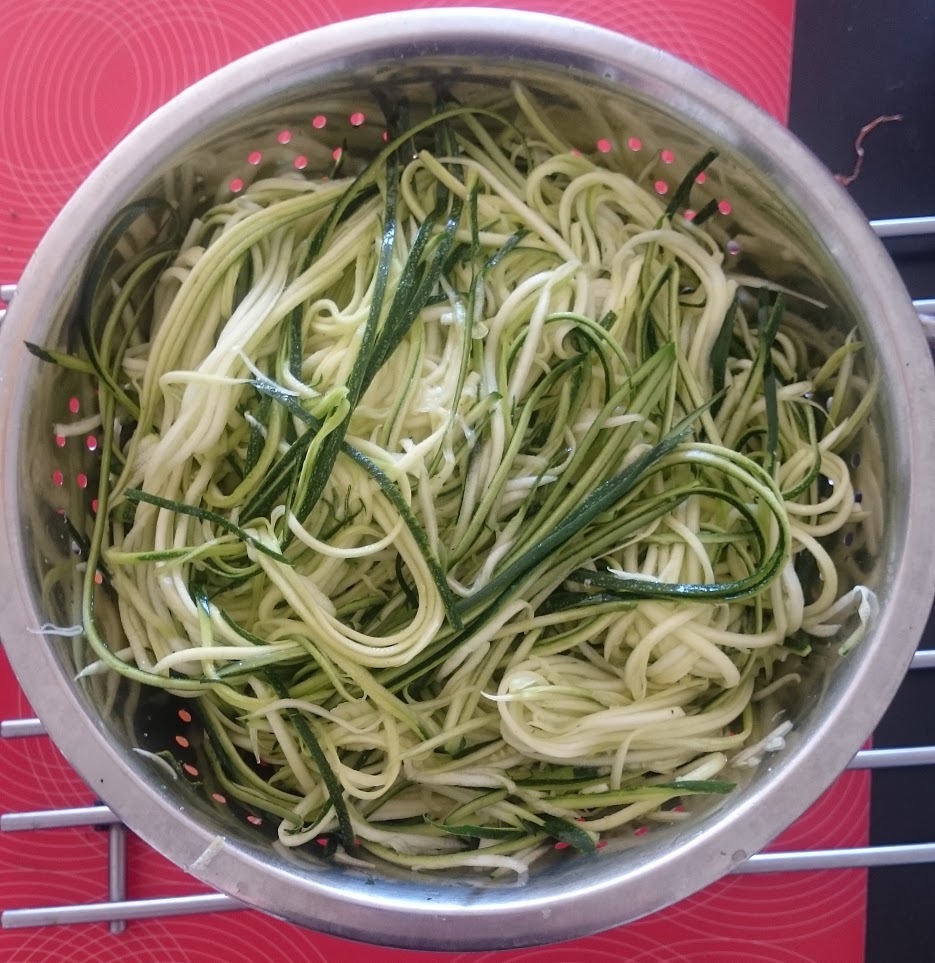 Put them in a colander, sprinkle salt on them, toss a little (delicately, those are fragile strands) and let them sit (any time from 15 mn to several hours is good. The more the better). While they’re losing their water do whatever it is you’re doing when you usually come back home.

Then it is time to assemble your recipe. Some protein: beef, chicken, fish, tofu, whatever you have available. In this recipe I used homemade meatballs made with a mix of pork and beef plus mexican spices, but use whatever you like.

I added sun dried tomatoes because I happened to have a packet sitting in a cupboard for a while, and homemade pesto because I had some leftovers. 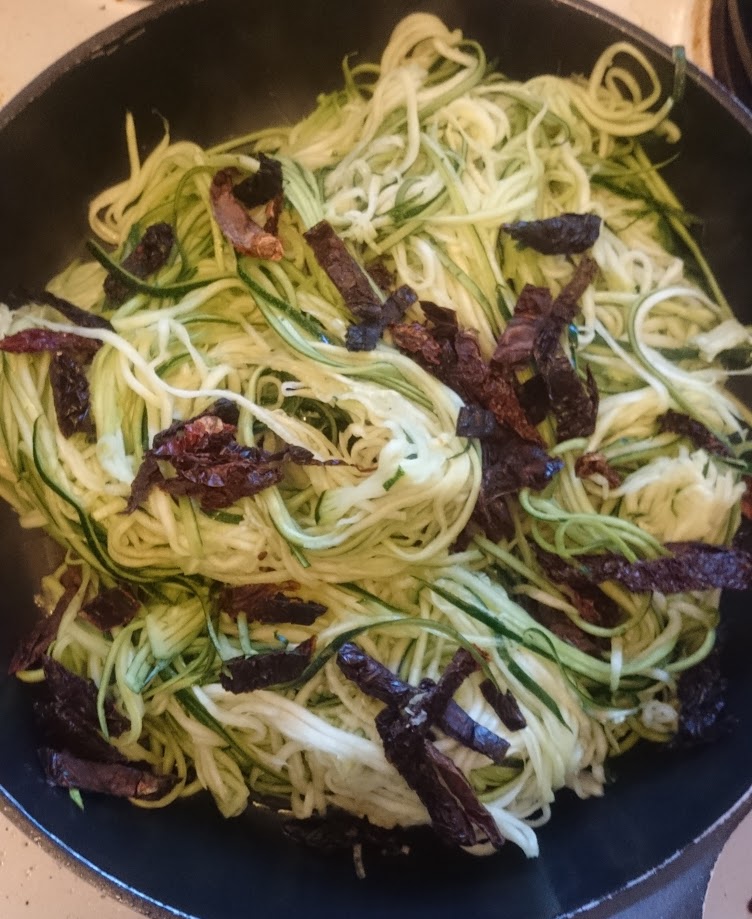 This recipe is relatively high in fat but if you use a leaner meat and replace the pesto with tomato sauce, you can easily cut 150-200 kcal from it. In order to make this recipe really lazy, your sauce and protein source should already be cooked beforehand, otherwise it will take more time than indicated in the recipe (but it’s possible to cook raw meatballs right before the zucchini are thrown into the pan).

1kg zucchini
400g meatballs made with half beef half pork (mine are 20g each, so it makes for 5 balls/pers.)
50g sun dried tomatoes (without oil), cut in little pieces
4 tbs. pesto (mine is homemade but a jar of store bought pesto is perfectly fine)
100g parmesan cheese
1 tbsp. olive oil
1 tbs. salt (I prefer coarse but fine will work as well)
Pepper to taste

Wash the zucchini (don’t peel them!) and cut them into a colander with a julienne peeler or a spiralizer or even a potato peeler (it will make large strands a bit like pappardelle). Sprinkle with the coarse salt and toss delicately to distribute it evenly through the zucchini. Let them sit in the sink for 15 mn to a few hours.

When it is time to cook, heat up the olive oil in a pan (fry the meatballs during 10 mn if they’re raw, if they’re already cooked wait after you have added the zucchini).
Squeeze the zucchini with your hands in order to remove as much water as you can. Add them to the pan together with the sun dried tomatoes, fry on high heat for 5 mn, stirring delicately. If your meatballs are already cooked this is the moment to add them.

Let cook another 5 mn or until the vegetables are tender but not overcooked (it’s important to leave some firmness in the zucchini noodles if you want to have the feeling to eat noodles and not a mush of veggies). Don’t add salt! The salt that you previously put on the zucchini to drain them from their water should be enough. But you can add some pepper if you like it. I know I do!

Once the zucchini and tomatoes are cooked and the meatballs are warm, divide the content of the pan into four bowls. Add one dollop of pesto to each bowl, sprinkle with parmesan cheese.

Enjoy, not before you have evenly mixed the pesto and cheese in the zoodles!