Jump to the recipe’s instructions

Here is a quick and tasty way to prepare chicken when you want to eat something a bit fancier than the usual grilled chicken breast.

Back in France I used to do a similar recipe with veal escalope, but in Sweden it’s a luxury and a rare meat that you can’t afford on an everyday basis. The recipe was also much simpler—barely a recipe really—as it merely consisted in frying the meat in a pan, then adding lemon juice, crème fraîche, and serving.

While I still think lemon and crème are meant to be married together and live a long smooth and silky life, I just wanted to add a little more depth and complexity to their relationship, just to keep things interesting. 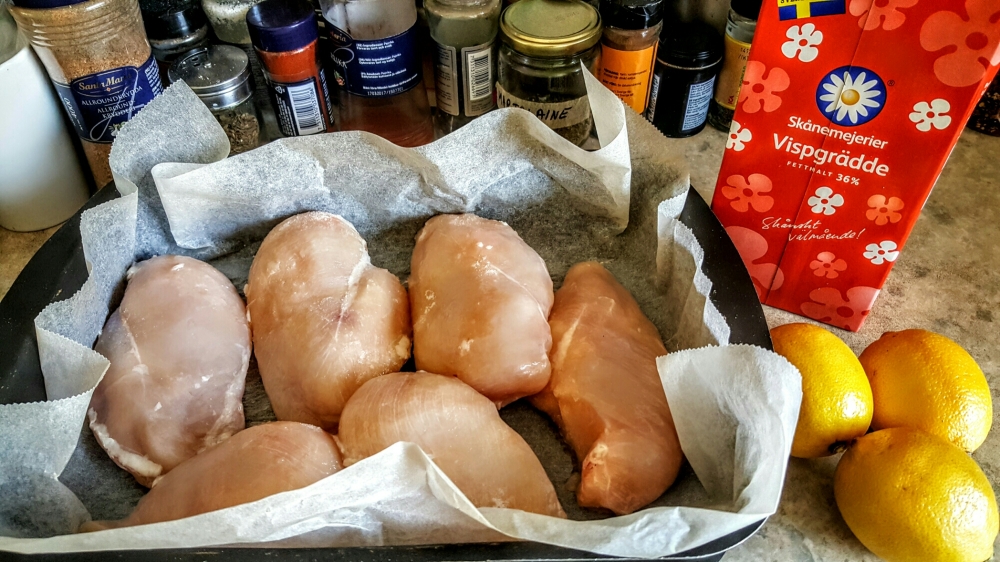 I started by heating butter in a pan, then threw the chicken in it (you can use fresh or frozen meat, it doesn’t really matter) and grilled it until it was golden brown. 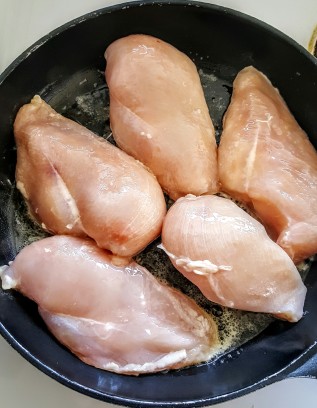 While the meat was cooking, I squeezed the juice of two lemons in a bowl.

To this I added three ingredients that really work their magic beautifully when combined together. First, a splash of Worcestershire sauce, for the depth and saltiness. Second, a few drops of Angostura bitters for the orange taste and added sourness. Don’t worry about the sauce being too dark or too bitter, the cream will correct all this. And third, the secret ingredient amongst all, the one which binds all the other ones together, I named vodka! If you’re doubtful about using vodka in this sauce, trust me. Just try it and see by yourself how the alcohol brings a kick to the lemon, enhances all the other flavors without overwhelming them (the vodka itself has a pretty neutral taste). You don’t need a lot of it, for this amount of chicken I just used 5 cl. (about the equivalent of one shot). I had only Żubrówka at home this time, and I was afraid the bison grass flavor would be too much, but it worked beautifully with the rest of the ingredients. You can of course use a vodka with a more neutral taste.

I mixed everything with the lemon juice, added salt and pepper, and poured the mixture over the cooked meat. I brought it to a boil and let it simmer a couple of minutes while continuing pouring the sauce on the meat with a spoon.

It was then time to add the cream. I used full fat 40% whipping cream for this recipe. Feel free to use a lower fat content cream, but I find the flavor and consistency is better with the fatter one, and the final amount of fat in the finished recipe is really not that high. I basically repeated the same process as with the lemon mixture, brought it to a boil, then cut the heat to avoid overcooking the cream, and continued pouring the sauce over the meat with a spoon.

This is the moment you can rectify the seasoning if needed. The chicken ends up being coated with the sauce on the outside, and juicy on the inside. You can serve it with rice, or any vegetables you like. 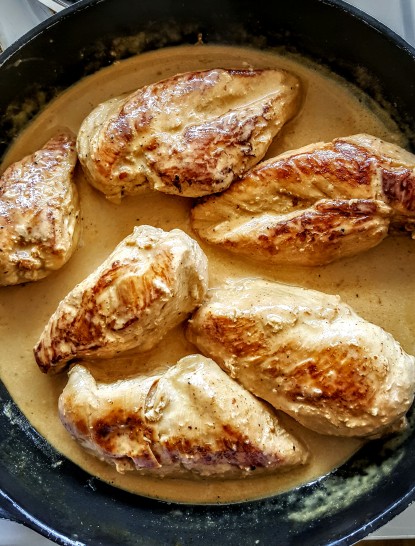 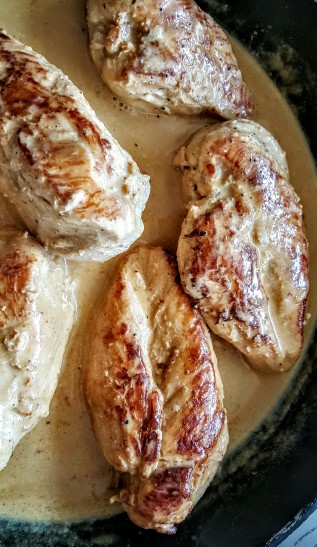 I served it with ratatouille, and it was awesome! 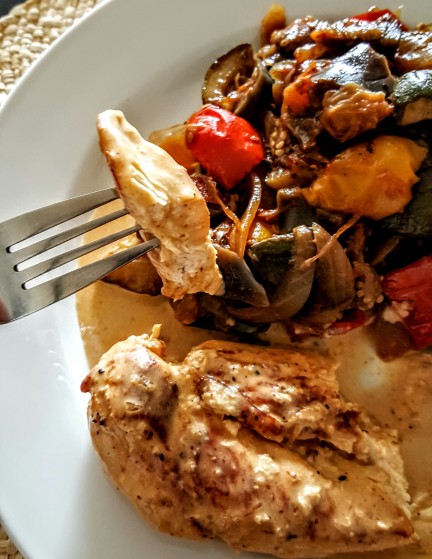 Macros per serving: 343 kcal., protein 45.5g, carbs 1.8g, fat 14.7g
(each serving may have a variable amount of protein depending on the size of the chicken breasts)

Heat up a frying pan to medium heat. When the pan is really hot, put the butter in it, wait for it to frizzle then add the chicken breasts. Fry them on both sides until they reach a beautiful golden color. It should take 7-8 mn per side.

While the chicken is cooking, squeeze the juice of the two lemons in a bowl. Add a dash of Worcestershire sauce (the quantity is really up to you, in this recipe I think I put about 1 tsp. of the sauce) and 15 drops of Angostura bitters (start with 10 drops and add more if you’re like me and prefer a stronger flavor). Add 1/2 tsp. salt and freshly ground pepper, stir well.

When the chicken is cooked throughout, pour the content of the bowl in the pan, and mix with the chicken. Bring to a boil and simmer 2 mn. Then add the liquid cream, bring to a boil again and cut the heat off. You don’t want to overcook the sauce as it would start to curdle. Keep on pouring sauce with a spoon to impregnate the meat all over. Rectify seasoning if needed.

Serve with rice if it’s your jam, or vegetables like haricots verts, cauliflower, and of course my inratable ratatouille! 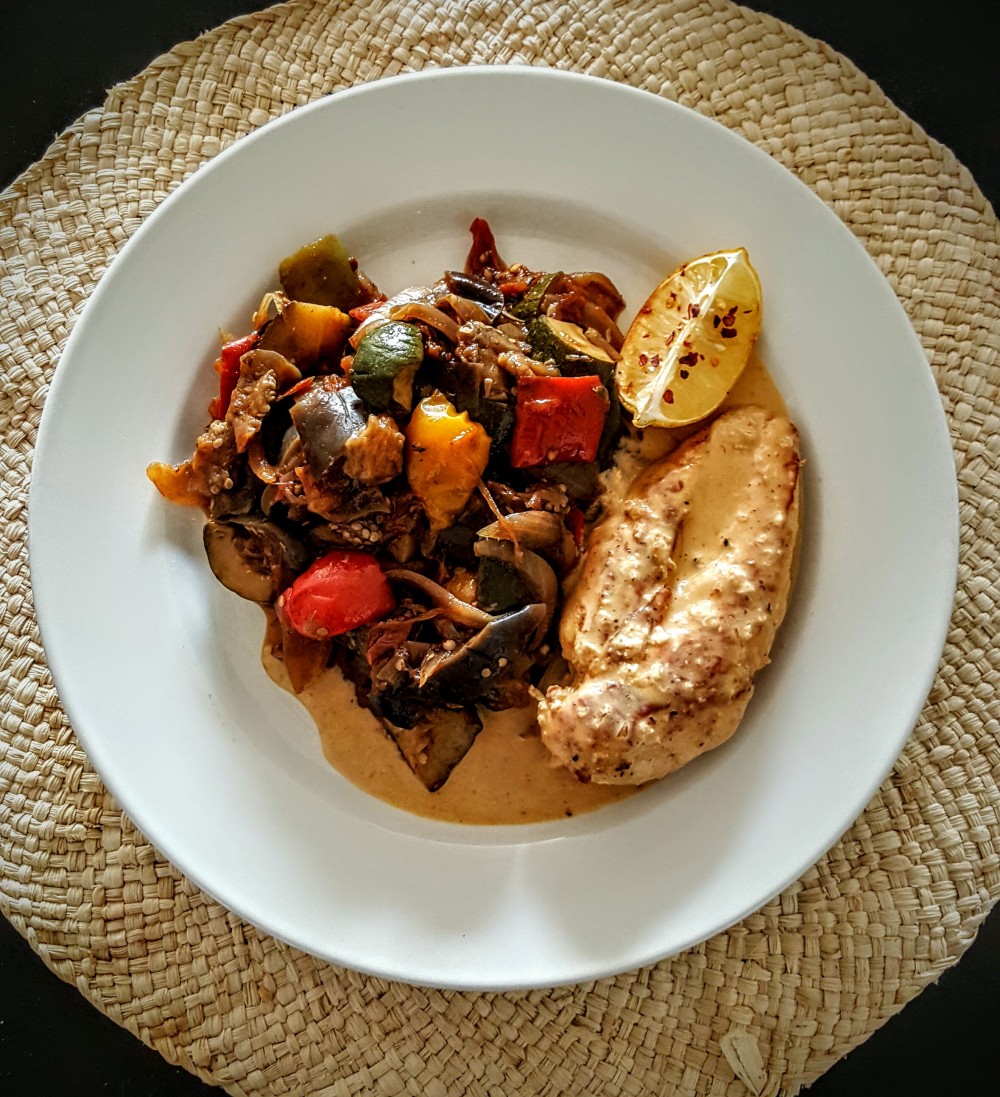